There may be many 4th blocks in Bangalore and many many more complexes ( BDA shopping complex ) , but when anyone mentions "4th Block Complex" it has only one meaning and location.Yup , its Jayanagar 4th Block.

Jayanagar 4th Block has been and will be my favourite "nagar" in Bangalore. This is the first locality I lived in when I came to Bangalore first, about 13years ago. I fell in love instantly , especially for the buzz around 4th block complex.

4th block complex is a old complex housing innumerable stores , market , eateries , hawkers to name a few. Its always buzzing with activity. You can get anything you need or want here.

Recently I took my son to this place and I hope it has made an impression on his young mind already. I believe this complex to be a miniature India of some sorts and I love the feeling of comfort and familiarity I get everytime I step in or pass by this place.
Posted by KP at 09:25 No comments:

I was very lucky to watch the screening of Dhobi Ghat at the ongoing London Film Festival.

Dhobi Ghat is Kiran Rao's directorial debut , produced by Aamir Khan. Film stars Pratiek ( Smitha Patil's son ) as one of the leads along with Aamir Khan.

The story is quite simple , but the treatment is fresh and what impressed me the most is the texture of the movie and effective usage of various mediums like Photography , handycam footage and most beautiful of them all monsoon in Mumbai. These form integral part of the movie and help take the narrative forward.

Its a brilliant and well thought out movie and well shot with attention to detail. Acting is top notch and Pratiek is the star of the movie. He is very natural and I think has got a very good future. Aamir Khan is very good as usual. Amongst the two leading ladies I liked the Yasmin character. She has a great voice ( hope she has dubbed her voice herself ) and expressive eyes.
Shai is modern and chirpy and has done well in the character of an oustsider in the city.

Kiran Rao knows her stuff and the Q&A after the screening ( my first ) was very good in that , Kiran came out very clearly on the thought process behind the movie. I am sure she will be the filmmaker to watchout in the future.

This is by far ARR's best album this year. Raavanan was good but wasnt great.

My favourites in this album are

1. Call Me Dill
2. Do Nishaaniyan - Sonu Nigam is at his lilting best in this song. I love the way he pronounces every word clearly and with the right feeling required. Music is very light and lets Sonu elevate this song with his voice.
3. Moonlight - Vijay Yesudas is amazing in this voice. He took his time but slowly and surely is becoming a very good singer. His pronounciations are pukka too.
4. Cry Cry - I love this song because of Shreya. Moment she joins in from the 2nd mukhda , it just gets elevated to a different level.
5. Hello Hello - Karthik is very good in this and his voice suits the mood of the song.

Overall Rahman proves again why he is the boss.
Posted by KP at 11:46 No comments: 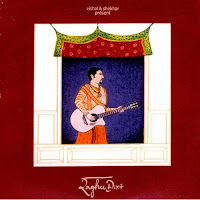 I have been in love with Raghu Dixit's music , particularly his very energetic singing voice , unique attire ( colorful lungi's and a gajra , which he uses actively during singing ). I have been soaking up his numbers especially the compositions by 18th century kannada peot Shishunaala shariffa.

So when I read about Raghu Dixit Project , performing live in London., I did not want to miss this opportunity to listen to them live at any cost. All the videos of them performing live that I had seen online were full of energy and songs were fantabulous.

On Sunday , 11th September 2010 , it was the 2nd day of Annual Mayor's Thames festival.So I land up at Southbank and lo behold , I see Raghu Dixit and his band doing sound check. I could not believe my luck that day. And then they started performing and took the assembled crowd to a different level. Raghu Dixit is a true showman in his own right. He made sure everyone assembled got involved in the performance. Before every song he gave in intro on what the song is all about. And what songs they were - Gudugudiya Sedi nodo , Lokada Kaalaji , Kodagana Koli Nungitta - yes believe it or not , here we were standing in front of the famous tower bridge of london , with majority of the crowd being europeans and Raghu is belting out one after another Kannada song , but we could not care less what language it was in. All that mattered was the music and the I am sure everyone assembled there understood exactly what the songs were all about.
After the concert was over , by which time the crowd had swelled to a considerable size , I waited to have a chat with Raghu and his band. It was the best part of the concert for me, to have been able to talk to Raghu and tell him how proud he is making us all feel . He calls his music Indian World Folk Rock , and it truely is mesmerising.

At the gig @ Jazz Cafe , we reached there nice and early. Raghu Dixit comes in and I go to say hi to him, and to my surprise he remembered me and spoke to me and came across as a genuinely nice person. I think it is this quality of his , which is also endearing to his fans , as I could see he was going around talking to all the people who had met him at the Thames festival gig.

Concert started with a solo performance by Raghu of Soruthihudu Maniya Maaligi. It was a captivating performance showcasing the sheer range and power of Raghu's voice. For the second song all his band members joined him one by one and I should mention here special praise for the lead guitarist Vijay. He seems almost like he doesnt know how talented he is , when performing. There is also Karthick Iyer on the voilin , extremely talented , holding his own amongst all the wester instruments around him. Concert was truly awesome and we left totally on a high that day , promising to watch this band perform whenever we get an opportunity.

Some of my favourite songs of Raghu , are listed below. Go by the CD of his first album - Antaragni , today , give all the songs a patient hear and drop a note to me if you like them.
Posted by KP at 18:41 No comments:

Thats my hometown , a tiny little hamlet in Udupi district.

It has always been a place to unwind for me during my growing up years. To start with there are no modern day aminities like Telephone , Television at my home. Newspapers are few and far between , cell phone signals are pretty weak to the point of being useless. So one is virtually cut off from the all the rabble tabble happening around the world. Invariably you get drawn inwards.

My visit this time was even more special because of the monsoon. Day 1 when we took a happless maruti van cab driver down the treacherous road towards my home , I fell in love with this place all over again. What with lush green surroundings , pollution less air , crisp morning sunshine to add to the beauty of the place. There is a stretch of the road , which everytime I pass over I get a strange exhilarating feeling time and again. I do not know the reason for this , but beauty of the surroundings is definitely one of them.Idyllic settings , far away from modernity , simple people adds to the sheer enjoyment I get everytime I am here.

Amongst all the happiness I was getting out of this place , there was also a sad note. That of declining families in the village primarily due to migration to cities. Lot of houses have been abandoned or left empty , as there is no one living in them. Relatives/families from my generation have all moved out to cities for work , so some of the houses are all left with people from my grandparents generation. After them even those will fall vacant. I do not know what is the solution for this , but it saddens me deeply that this hamlet will not look the same when my son grows up. I can only hope that somehow all of this survives and retains its beauty.

Least I can do ( will do ) is to visit Kalmanje once a year with family and try to keep the setting as it is , wherever and whenever possible.
Posted by KP at 08:08 No comments:

Yes , I am heading back home after a year and half being in London. Although I have been visiting home every year , this time its special. Special for one reason and one reason only , I have made up my mind to return for good.

Since the time I took the decision to return back for good , I keep dreaming about home , making plans for what all I want to do when I get back , what all I want my son to learn etc etc.

Its strange that we need to be far away from the most important parts of our lives to realise how much we miss them. This tendency of taking for granted all the things that are very important and what defines us as a person has been baffling me for long. But I am happy I did this stint outside , as I have realised how and why I have always been a proud Indian.

To Kill A Mockingbird

I got the opportunity to watch "To Kill A Mockingbird" recently. Movie is an adaptation of American author Harper Lee's novel of the same name. Its simply remarkable and remarkably simple story and movie.

The story is very simple story but with a lot of life changing thoughts especially on prejudices that one might have on certain aspects of life and how these affect a individual, family , community and entire humanity as a whole.

Even though the story is based in 1930's USA , in the southern region , I think it is still relevant in this day.

Gregory Peck is absolutely brilliant as the morally upright Atticus Finch. Its his children and their friend who are more endearing , more so since the story unfolds from the perspective of Finch's daughter Scout.

I dont think there is anything for me to say , more than it has already been said all these years on this masterclass of a movie. I cannot wait to own the book and DVD , as I am sure it is going to be one for the collection that will pass down to the next generation.
Posted by KP at 10:34 No comments:

KP
Random thoughts on my interests